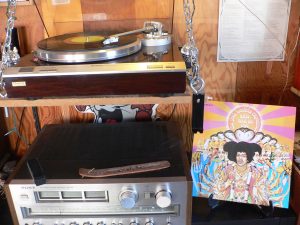 This glorious album was released on the Track label in 1967 in the UK. The US version wasn’t released until 1968 on the ? label. I am not sure and the version I have is a reissue released in 2010 on the Legacy label. Which, actually, could have been better.

What can i write about this that hasn’t already been written? The album is awesome. It’s Hendrix. I’m done….

And I’ll get back to it in a minute, but first, I wanted to respond to this: “The cover art is too small,” we sneered. “How are you supposed to clean your pot on that?” It’s from this article and it’s a terrific article. I laughed out loud reading that line because I thought the […]