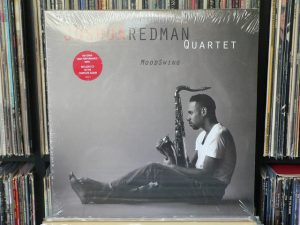 How cool is that?

Back in the day I got sweet seats (row A!)to see a Joshua Redman Quartet gig at Mechanics Hall in Worcester, MA. It was 4 nov 1995, an 8:00 PM show. The fellas were top-notch although most of the crowd was motionless in their seats. Not us, my friend and me. We grooved plenty and fed on the stares of the Mrs. Proper-Old-Ladies in the audience. They were adorable. Yeah, that’s the word. The band was jammin’ and tight. They had been playing together a while.

After the show I grabbed my friend and swept her to ‘the back’ in order to meet the fellas. I was pretty excited because, you know, little schoolgirl and all. It made my friend excited, too. It was great. I was meeting the groovin-est fellas playin’ at a time where everything I listened to was Jazz. I ate, slept, and lived Jazz and there I was, with my friend (shut-up, you know she was my girl-friend) shaking the hands of who I knew were legends. 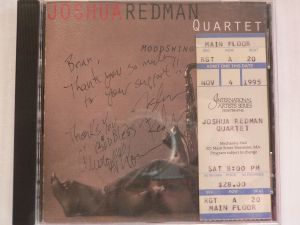 I brought my MoodSwing cd along and got that signed by 3 of the 4 fellas. I don’t remember which one it was, the pianist or drummer, but one of them cut out immediately after the show. I saw him ditch it in the elevator. The other 3 fellas were a joy to speak with and I know Joshua would remember me to this day if we were to meet again. I make it a point to not be boring 😉

In any case, I opened the album and listened to it. What I do is slice into the cover opening so the shrink remains intact but opened so I can get the album out. As I am not a critic I won’t wax poetic about the album dynamics or the band’s mojo, suffice it to say that, although I think the bass could have been tighter, the album was dead-quiet and the music bounded off the platter bringing the band into my room. It was smooth, full and lush. That’s why I love vinyl, there is no sound like it. A well made album sounds incredible and this one is no exception.

As for recommending this album, because people ask, hells yeah! It’s a watershed album for the fellas — all of the musicians on MoodSwing are recognized as superstars of Jazz. Check out their sites below – and check out their music, you know, if you’re into good music. 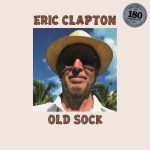 Yesterday I was over at a friend’s place and we were heavy into rehcid-nerd territory.  Label variations, vinyl composition, pops vs. crackles, Colombia 6-eyes and most specifically – how to clean all our fabulous records.  We took a break and headed over to the local record store; neither of us wanting to buy more, because […]