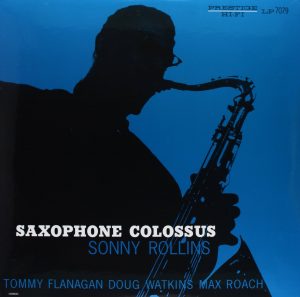 My wife suprised me some years ago with her joy of this album. To be fair, she only admitted to enjoying St. Thomas, but for a hip-hop chick of the late ’90s, that was something. When she confessed to liking Sonny Rollins I liked her even more.

I bought the cd some time in the early ’90s and I put Moritat and St. Thomas on a bunch of mix tapes. It was always fun in the car when Summertime came on and wife went from a RunDMC groove to a Sonny Rollins groove, without missing a beat. I had honestly grown tired of “her” music, replete with fuck yous and bitch this and nigga that. The beats were there, in ‘her’ music, but the songs were appaling to my rocker snooty sensibilities. It’s easy for me to go from Rock to Jazz and Blues to Rhythm & Blues back to Jazz or Orchestral but Hip-Hop to Jazz and back again gave me a headache. No matter the similarities. Although, I have to say, snooty or no, I hear the influences of Jazz in modern music. It’s inescapable though I loathe saying one band was influenced by another or one style of music. Influences are cop outs to me. Everything influences everything else. Next…

The tracks on this album are ‘standards’. This means they are part of the body of work in the Jazz genre that anyone and everyone plays. Like “Smoke on the Water” when you learn guitar, Jazz players will play Blue 7 as a matter of course. I consider these songs part of The Great American Songbook. Of course, they are not ‘showtunes’ or happy lyrical numbers that Rogers or Porter penned, or the Gershwins. Regardless, they are standards and I consider that part of the songbook.

As for quartets, the fellas comprising the Sonny Rollins Quartet at the time of this album were every bit as good as any other quartet of the time or since. I don’t know much about Doug Watkins, but in musical circles, you can’t go 10 minutes without hearing about Tommy Flanagan or Max Roach. On their instrument, they were among the best and most celebrated. When they got together to play and record ‘Saxophone Colossus’ it was a watershed moment in music. The world was gifted something special that day in the Summer of 1956.

If you enjoy music, even if you think you don’t like Jazz – Saxophone Colossus is an amazing album. One of those albums that leaves you wanting when it finishes, which, is the mark of a great album. Take a chance and expand your horizons, this album will make you happy, get you groovin’, and give you plenty of ‘WOW’ moments, many of which will sneak up on you. This is Jazz at its best; groovin’, subtle, flowing and even ribald.

People sometimes ask, hey, man, why is your turntable mounted on the wall? Whaddya you, some kind of weirdo? Sometimes, depending upon who’s asking, I may go into this whole schpiel of esoteric bullshit, you know, tell them all manner of reason. I watch their eyes bounce around the room in a “oooooh, goooood for […]